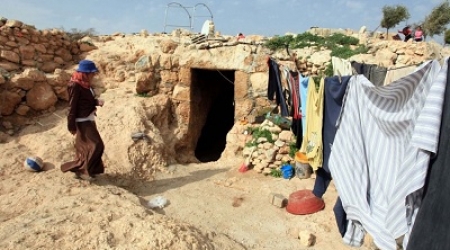 Scores of Palestinians in the occupied West Bank have made homes in caves, on the outskirts of Al-Khalil (Hebron), as Israeli occupation authorities continue to prevent them from building homes on territories earmarked for illegal settlements for Jews. (Al Ray) Noaman Hamamda, age 57, told Anadolu News Agency that he and his fellow Palestinians in this predicament have tried to build homes with bricks and cement, but that the Israelis demolish the structures on the grounds that they have been built without a permit.

It is very rare for Palestinians to be given a building permit by the occupation authorities.

Hamamda and his 13-member family currently live in a cave covering around 30 square meters; they have no basic amenities. Nevertheless, he and other Palestinians in the area say that they would rather suffer such harsh living conditions in the caves than abandon their ancestral land to Israeli settlement projects.

“The occupation keeps trying to evict us,” said Hamamda while his wife Rasmiya prepared tea with primitive utensils, “but we refuse to give up the land. Life is hard for us here, but you get used to it.”

The family’s cave is split into three sections: one for sleeping, another for storing grain; and a third for receiving guests. Outside the cave is a wood oven that Rasmiya uses for cooking and baking bread. “We live a primitive life, but we endure it for the sake of protecting our land,” she said.

Hamamda’s is one of about 15 Palestinian families living in caves in Al-Khalil’s mountainous Al-Mafqara village, one of a cluster of Palestinian villages nestled between five affluent illegal settlements reserved for Jews and built by Israel on confiscated Palestinian land. Israeli troops have entered the area in force repeatedly in recent years to demolish structures built by Palestinian residents.

The most recent raid by Israeli forces on Al-Mafqara was in 2013, when army bulldozers destroyed an electricity generator that had provided residents with power for a few hours each night. During the same raid, the Israelis also leveled a local mosque.

See also: Children of the Occupation: Growing Up in Palestine