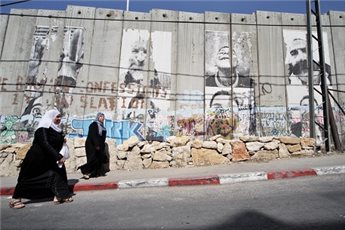 A Palestinian who was injured after falling while trying to climb over the Israeli separation wall, last week, died of his wounds on Wednesday.Akram Mahmoud Mohammad Abd al-Hamid Al-Hroub, from Deir Samit village southwest of Hebron, fell off the wall while he was trying to scale it in order to cross into Israel for work.

Following the fall, he was taken to al-Makased hospital, in Jerusalem, with serious injuries.

He subsequently underwent several operations before succumbing to his wounds on Wednesday.

His body was taken back to his village, where he was laid to rest on Wednesday afternoon.

Around 60,000 Palestinians are employed inside Israel, but only about half of those have proper documentation.

An estimated 30,000 Palestinians cross into Israel without any work permits, largely traveling through wilderness areas to avoid the strict Israeli permit regime.

Some of these undocumented workers cross in populated areas, however, where they have to scale sections of the wall that reach up to eight meters.

Additionally, in many places the wall has large no-go zones on either sides, in addition to Israeli military sniper towers.

See also: 02/08/15 Bethany Beyond the Jordan, Palestine and Israel’s Policy of Apartheid by Siraj Davis