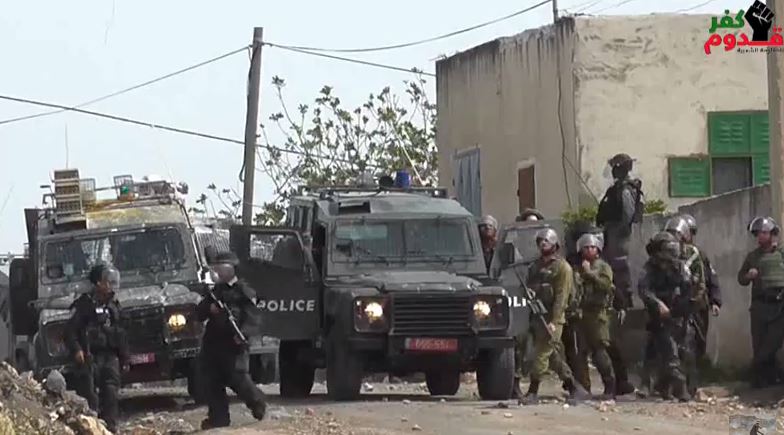 Dozens of Israeli soldiers invaded, Friday, the village of Kufur Qaddoum near the northern West Bank city of Qalqilia, and attacked its weekly nonviolent protest against the Wall and settlements, leading to clashes; at least five Palestinians injured.The Popular Committee against the Wall and Settlements in the village said the soldiers closed main roads, fired dozens of gas
bombs, concussion grenades, rubber-coated metal bullets, and live ammunition.

Clashes erupted between the invading soldiers and scores of local youths in the village that was covered with smoke resulting from gas bombs fired by the soldiers.

Coordinator of the Popular Committee against the Wall and Settlements in Kufur Qaddoum Murad Shteiwy said the soldiers used excessive force against the weekly protest that is also held demanding Israeli to reopen the village’s main road that the army sealed 13 years ago.

He added that the soldiers invaded the village from three directions while firing dozens of gas bombs and live rounds.

In addition, an Israeli military bulldozer destroyed the main water pipe leading to the village, causing the villagers to be without running water for a few hours before local maintenance teams managed to fix it.