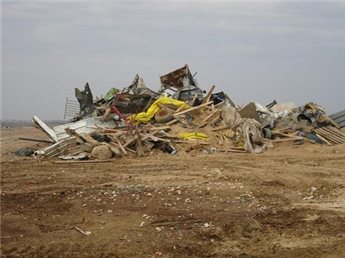 A march set off, Saturday, from the Negev city of Rahat for al-Araqib village, in protest of the continuous demolition of homes in the village.The housing structures have reportedly been demolished more than 80 times.

The village sheikh, Sayyah Abu Mdeighim, as well as activists and lawyers from the Negev, took part in the march, carrying signs that read: ‘Stop Demolishing al-Araqib.’

He added that other Palestinians should organize similar marches to defend their land against Israeli incursions.

Activities marking the 39th Palestinian ‘Land Day’ were also carried out in the al-Araqib, commemorating a general strike and marches that took place on March 30, 1976, in protest over Israeli land seizures.

Six unarmed Palestinians were killed and hundreds injured by Israeli forces that day.

Demolitions, in addition to denial of basic services and access to infrastructure, are part of an ongoing campaign by Israeli planning committees against the Bedouin villages in the Negev desert, where roughly 70-90,000 people live.

In May of 2013, an Israeli government committee approved a draft bill setting a framework to implement the evacuation of ‘unrecognized’ Bedouin villages in the Negev, most of which existed before the state of Israel.

Al-Araqib is among some of the 40 Negev villages Israeli authorities have deemed unrecognized, arguing that the 53,000 Palestinian Bedouins living in them cannot prove land ownership.

They are the remnants of the Bedouin population that lived across the Negev Desert until 1948, when 90 percent of the local population were expelled by Israel and the remainder confined to a closed reservation.