Dr. Ashrawi on the Adoption of 3 UNHRC Resolutions Regarding Occupied Palestine 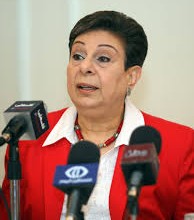 “On behalf of the Palestinian leadership and the people of Palestine, we express our great appreciation and gratitude to the members of the United Nations Human Rights Council (UNHRC) who assumed a principled, courageous and just stand and overwhelmingly voted in favor of three UNHRC resolutions regarding the occupied State of Palestine, including East Jerusalem, at the 28th regular session of the UNHRC.”PNN reports that, in short brief, the three resolutions called for ‘the inalienable, permanent and unqualified right of the Palestinian people to self-determination, including their right to live in freedom, justice and dignity and the right to their independent State of Palestine’; confirmed ‘that the right of the Palestinian people to permanent sovereignty over their natural wealth and resources must be used in the interest of their national development, the well-being of the Palestinian people and as part of the realization of their right to self-determination’; condemned ‘the continuation by Israel, the occupying Power, of settlement activities in the Occupied Palestinian Territory, including in East Jerusalem, in violation of international humanitarian law, relevant United Nations resolutions, the agreements reached between the parties and obligations under the Quartet road map, and in defiance of the calls by the international community to cease all settlement activities’; and expressed grave concern regarding the construction and expansion by Israel of settlements in and around occupied East Jerusalem and in the Jordan Valley, the demolition of Palestinian homes, the eviction of Palestinian families, ‘the continuing construction by Israel of the wall inside the Occupied Palestinian Territory, including in and around East Jerusalem,’ ‘the incidents of violence, destruction, harassment, provocation and incitement by extremist Israeli settlers,’ ‘the construction of new housing units for Israeli settlers in the West Bank and around occupied East Jerusalem,’ ‘the excessive use of force and military operations causing death and injury to Palestinian civilians, including children and women, as well as to non-violent, peaceful demonstrators and to journalists,’ ‘the disastrous humanitarian situation and the critical socioeconomic and security situations in the Gaza Strip,’ and ‘the conditions of the Palestinian prisoners and detainees, including minors, in Israeli jails and detention centres,’ among many other Israeli systematic violations of international law and Palestinian human rights.

The United States was the only UNHRC member that voted against the three resolutions.

“Rather than acting in accordance with international law, democracy and human rights, the U.S. made the decision to isolate itself at the expense of Palestinian rights, lives and lands.

Such resolutions constitute a step in the right direction, and it is high time for the military occupation of Palestine to end and for all members of the international community to hold Israel accountable with punitive action and measures and to recognize Palestine in the immediate future,” concluded Dr. Ashrawi.