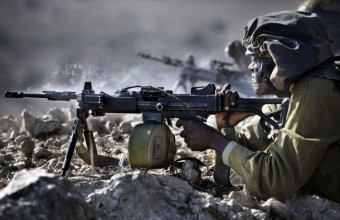 The Israeli Army Saturday opened machine gunfire and launched a missile toward Palestinian agricultural land along the eastern Gaza borders, according to WAFA correspondence.A loud explosion and the sound of numerous shots were heard to the east of Al Shuja’eyya neighborhood, spreading a state of fear and panic among residents and their children, particularly school students nearby the area.

Israeli soldiers stationed at watch towers along the borders, to the east of Gaza city, fired of a missile and opened a hail of gunfire toward Palestinians’ agricultural land, causing damages and financial losses to properties.

Israel has unanimously declared large swathes of land along the Gaza border a buffer zone, which extends between 300 and 500 meters from the border with Israel.

The Israeli army and border police have repeatedly opened fire through the border despite an Egyptian brokered ceasefire agreement reached on 26 Aug 2014. which was supposed to put an end to hostilities between Israel and Palestinian factions.

According to the UN Office for the Coordination of Humanitarian Affairs (OCHA), 17 percent of Gaza’s total land area and 35 percent of its agricultural land were within the buffer zone as of 2010, directly affecting the lives and livelihoods of more than 100,000 Palestinians in Gaza.