Head Of the Popular Committee Against The Wall Released 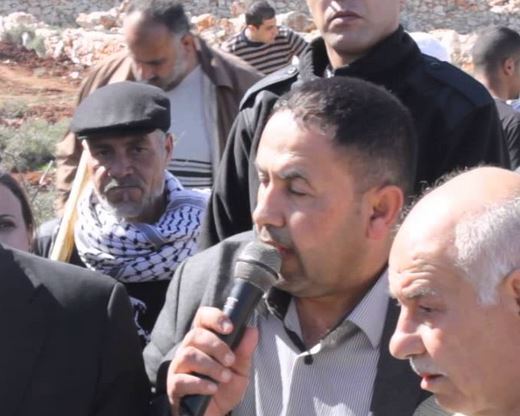 The Israeli Authorities released, Sunday, the head of the Popular Committee against the Wall and Settlements, in Nabi Saleh village, near the central West Bank city of Ramallah after holding him for more than 24 hours, when the soldiers used excessive force against nonviolent protesters marking the 39th anniversary of the Palestinian Land Day.Dozens of Palestinians marched Sunday in front of the ‘Ofer Israeli military prison, demanding the release of Jamil al-Barghouthi, before the soldiers fired concussion grenades and gas bombs on them.

The ‘Ofer prison, and its military court, are built in Palestinian lands belonging to residents of Betunia town, west of Ramallah.

The court initially ordered the release of al-Barghouthi after instating a 5000 New Israeli Shekels fine, in addition to trying to force him to vow to refrain from participating in the protests against the Annexation Wall and settlements, but he refused to sign any agreement.

Al-Barghouthi became the head of the Committee after the army killed the former head, Palestinian Minister Ziad Abu ‘Ein. http://www.imemc.org/article/69966

Al-Barghouthi is active in popular, nonviolent, resistance activities against the Israeli Annexation Wall and colonies in different parts of occupied Palestine, and was one of many activists who installed the “Jerusalem Gate” protest tent village in Abu Dis town, near occupied Jerusalem.

He was also repeatedly kidnapped, and imprisoned by the army.