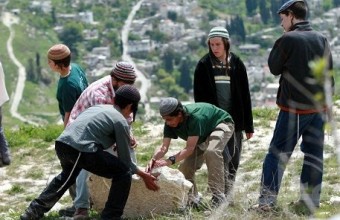 Witnesses and citizens of towns and villages west of Salfit reported that bulldozers were tracking the area and left with several massive stones. Settlers are using this kind of stone to pave new streets of newly built settlements.Palestinian researcher reported that they are traces or crushed stones in settlements, grinded and crushed stones and rocks are to be used in various fields related to the construction of housing units in the settlement, at the expenses of the territory of the towns and the villages of Kafr al-Dik, Rafat, Bruqin, Deir Balut and Sarta.

He pointed out that after Israeli PM Netanyahu‘s re-election, fear of a speed in settlement construction is palpable in many areas in the West bank, and, with that, other systemic human rights abuses committed by Israel.

Numerous UN resolutions have stated that the building and existence of Israeli settlements in theWest Bank, East Jerusalem and the Golan Heights are a violation of international law, including UN Security Council resolutions in 1979 and 1980.

UN Security Council Resolution 446 refers to the Fourth Geneva Convention as the applicable international legal instrument, and calls upon Israel to desist from transferring its own population into the territories or changing their demographic makeup. The reconvened Conference of the High Contracting Parties to the Geneva Conventions has declared the settlements illegal as has the primary judicial organ of the UN, the International Court of Justice and the International Committee of the Red Cross.

The position of successive Israeli governments is that all authorized settlements are entirely legal and consistent with international law, despite Israel’s armistice agreements all being with High Contracting Parties.

In practice, Israel does not accept that the Fourth Geneva Convention applies de jure, but has stated that on humanitarian issues it will govern itself de facto by its provisions, without specifying what these are. The majority of legal scholars hold the settlements to violate international law, while others have offered dissenting views supporting the Israeli position.

Military occupation does not vest the occupying power with sovereignty over the occupied territory.