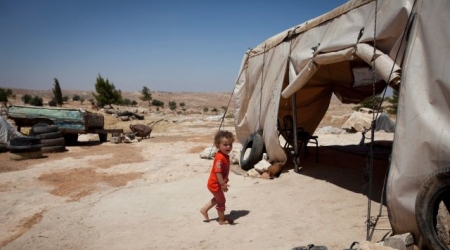 The Israeli public prosecution has asked the Israeli High Court of Justice for permission to demolish the ancient Palestinian village of Sussia, and relocate its residents to Yatta, near Hebron, allowing for more ‘archaeological‘ work at the site.Israel’s intent was noted in a response to the High Court of Justice regarding a petition filled by Sussia residents and human rights organizations about a year ago, according to Al Ray Palestinian Media Agency.

Before this petition was filed, an additional petition was filed by the Regavim organization, funded by settler-group Amana and Isaeli regional authorities in the West Bank, calling for what they claimed Palestinian “illegal outposts” in Sussia to be demolished.

The petition criticizes decisions made by the Israeli Civil Administration’s planning committee to reject an alternate plan suggested by Sussia residents, stating that the relocation to Yatta is in their best interest. The residents’ petition also seeks to cancel 64 separate demolition orders against all of the 100-or-so structures in the village.

Alternately, the residents ask that the Civil Administration offer a different solution that would allow them to continue living on the land, which they own.

Israeli attorney Kamar Mishraki-Asad, representing the Sussia residents, told Haaretz, “It’s incredible, but with the settlements, it was already ruled that Sussia land is privately owned and thousands of dunams of land in the area are privately owned by Palestinians. Despite this, for many years the army has prohibited residents from setting up their homes in the area, and has rejected any request for construction or planning permits, in order to keep them away from the Sussia settlement and to allow the settlers to continue seizing the agricultural lands, and expel the residents to Areas A and B.

“Now, after residents made great efforts and prepared plans for their village, the army continues its policy while cynically relying on planning concerns,” Mishraki-Asad added. “For years, the army has forbidden water, electricity and drainage infrastructure to be built, and now claims that expelling the residents is for their own good.”

Last Thursday, the prosecution issued its official stance on the matter, claiming: “There was no historic Palestinian village at the archaeological site there; that the village consists of only a few seasonal residences for a few families; and the land is necessary for the continuation of archaeological work.”