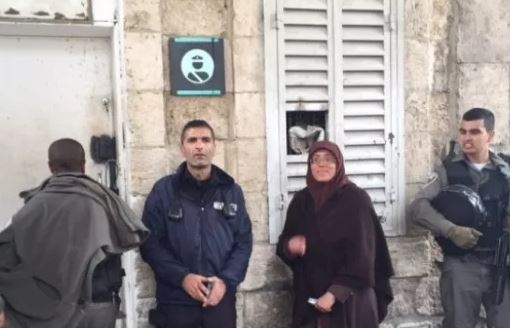 Israeli soldiers kidnapped, on Tuesday at dawn, three Palestinians near the central West Bank city of Nablus, and a young man in occupied Jerusalem; two women and one child kidnapped, late on Monday, near the Al-Aqsa Mosque.Media sources in the northern West Bank city of Nablus said several Israeli military vehicles invaded, during early dawn hours Tuesday, Aseera ash-Shemaliyya village, stormed and searched a number of, and kidnapped three Palestinians.

The three have been identified as ‘Ala ‘Ali Shouly, ‘Ala Hamed Shouly and Qais Abu Halima Jawabra.

The soldiers also invaded a home in al-Wad Street, near the Al-Aqsa Mosque, in occupied Jerusalem, and kidnapped a member of the Fateh Movement Youth Group, identified as Yasser Najib, before taking him to an interrogation facility in the city.

Late on Monday, Israeli soldiers kidnapped a Palestinian woman near the Silsila Gate (Chain Gate) near the Al-Aqsa Mosque for what the army called “violating a court order” banning her for entering the mosque.

In addition, the soldiers kidnapped another woman, and a child, in the courtyards of the Al-Aqsa Mosque.

It is worth mentioning that Israeli extremists stormed, Monday, the Al-Aqsa Mosque yards through that al-Magharba Gate, and conducted provocative tours while accompanied by scores of soldiers and police officers.