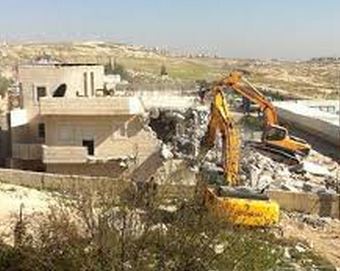 Employees of the Jerusalem City Council demolished, on Tuesday morning, some sections of Palestinian home, a horse barn and some walls, in the Market area (al-Hisba) in Wad al-Jouz neighborhood, in occupied East Jerusalem.Sharaf Amro told the WAFA news agency that dozens of residents gathered in an attempt to prevent the soldiers from demolishing his home, and that the soldiers partially demolished his neighbor’s home, belonging to Totah family.

Amro added that the soldiers demolished several walls, storage rooms, and a few tin structures in the area.

WAFA said the soldiers declared the area a closed military zone, and prevented journalists from entering it, and that clashes took place between the invading army and local residents, including scuffles between the soldiers and owners of the targeted structures.

Amro told WAFA that Israel wants to demolish several homes and walls that have been built behind the Market area, in Wad al-Jouz, dozens of years ago, and that the homes are built on around 25 Dunams of Palestinian lands extending from Suwwana neighborhood to al-Absat Gate (Gate of the Tribes).

Israel previously illegally confiscated parts of the lands in question, and built walls, while the new violations pose threats on around 100 Palestinian homes in the area.

The lands are part of the Islamic Waqf Department, while Israel is planning to build parks, a mall, road and a parking lot.

Amro said the Palestinians fear Israel is close to removing the entire market along with the old homes, as part of its plans to build a Talmudic Garden, in addition to its escalating the construction and expansion of Jewish-only colonies.