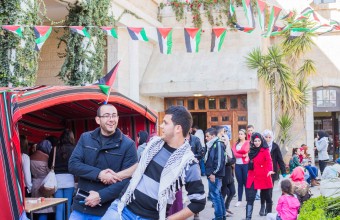 Every year, students at Bethlehem University head to the elections booths to select their representatives at the Students Senate. Tomorrow, 65 percent of the students eligible to vote cast their votes to select the best candidates for the Student Senate.Today, one day before the Election Day, is dedicated for campaigning and debating. The two competing blocks spread posters, flags and hand-outs to attract the votes of their fellow students.

“Election Day is a sign of democracy here at the University,” explains Lama Al Shwalmy, history student and member of the Popular Front for the Liberation of Palestine (PLFP), “through the elections students are free to choose their representatives at the Senate; it is a way to practice our rights”.

The Election Campaign lasts two weeks, starting with the Palestinian Traditional Wedding , organized by the Student Union and attended by all parties.

During these two weeks, the leaders of each party present themselves, their believes, aims and objectives to the students, as a real political propaganda.

There are 4 parties in Bethlehem University:

Fatah Youth Organization
PLFP (Popular Front for the Liberation of Palestine),
whose party is Watan (homeland in Arabic)

The Student Council Election occurs every year and all the parties run for 31 seats in the Student Union.

The university filled with colorful flags from each party union, and the leaders and members of each hold meetings with students: “All the organized activities should be union type work, not for real political reasons or purposes”, tells Motaz Allan, head of The Student Union Council and of the Fatah-affiliated Student Bloc at Bethlehem University, “they should do it for the good of the university and the students, not to reach political goals”.

Motaz asks for a student union made of parties able to represent and respond to the needs of the students: ‘what each party wants to achieve is reached through the students that put faith in it”.

The dynamics are the same that can be found in any democratic election: “this is a training for the future, most of contemporary Palestinian politicians were head of student parties in university” adds Motaz. “It’s like an exercise for the students that are interested one day in becoming well trained democratic political leaders”.

For years, the Student Senate has been an essential part of Bethlehem University ‘s ambition to provide for its students an environment characterized by pluralism, openness and respect. It acts as a representing organ for the students coming together from various social and religious backgrounds, from cities, villages and refugee camps. It further aims to foster concern for the University and interest in academic affairs among the student body, to enhance the students´ sense of responsibility and leadership and to promote good relations among students and between students, staff and the University Administration.

Tarek Shahen, social work student and representative of PLFP: “Each of the current running parties origins and is connected with the parties outside the university scenario, each has its own political agenda. This is a democratic game, trust is built along the way”.

Dania Awda, nursing student, PLFP member: “Every term each party works to build the trust among the students: they look for the students interests and needs and try to reach the students by giving them what they want.

Each party organize social and political activities, sport – these actives help the students to socialize and build a civic and community sense, this makes us feel part of a whole student experience beside the studies”.

Nader Al Khatib, leader of the Islamic Jihad (usually in a coalition with members of the Hamas party running as Islamic Union): “For the last two years we did not run because the Israeli arrested all our leaders. We do not invite or ask the people to be part of our party but we show them our ideas through our organized activities. We do not believe in political propaganda. We do not work politically in the university, we support the students and make them want to join the political life starting from the university because we believe it is the right of every Palestinian to structure ideas and act as active and rightful political citizens”.