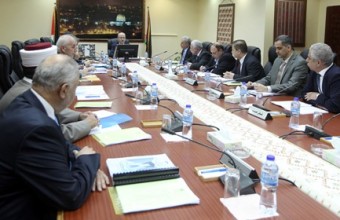 Palestinian governmental spokesperson Ihab Bseiso, Monday, assured that, ‘Until now we haven’t received any money, nor have we officially been informed of anything.’The Palestinian Finance Ministry stated that the deductions made by Israel to cover services provided to the Palestinians haven’t been ‘agreed upon’ and constitute ‘an unjustified and illegal procedure that could cause complications’.

PNN reports that the ministry affirmed a transfer of the tax revenues is not a favor from the Israeli government, and that the Palestinian government rejects any unilateral deductions outside the relevant calculation mechanism.

It viewed the deductions, which were not made in a transparent and fair manner, to constitute a continuation of the Israeli policy of reprisals against the Palestinian people and called on the international community to pressurize Israel into releasing the total sum of the withheld tax revenues.

The Israeli government decided to withhold around $375 million in tax revenues it collects on behalf of the Palestinian Authority on imports and exports, over the last three months, in reprisal for the PA’s accession to the International Criminal Court (ICC) to try Israel for war crimes.

The PA formally applied to join twenty international organisations, including the ICC, on January 2nd, following the United Nations Security Council’s failure to pass a Palestinian draft resolution setting a deadline for ending the Israeli occupation and establishment of the Palestinian state, according to WAFA.