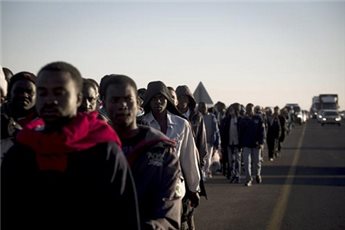 Israel will begin deporting Eritrean and Sudanese refugees to third party countries in Africa against their will, under a new policy initiated by the Israel Population and Immigration Authority, Israeli media reported Tuesday.Ma’an News Agency reports that, up until now, asylum seekers officially had to sign a document indicating voluntary departure from Israel, as it is a signatory to the Refugee Convention which restricts a state to deport individuals whose lives are in danger in their home countries.

The Population and Immigration Authority, who is promoting the future induction of the policy, argues that there is no law preventing Israel to deport asylum seekers from Eritrea and Sudan to a third party country where their lives are not in danger.

Under this assumption, the Ministry of Justice will have the power to deport a refugee against their will to a neutral country, according to Israeli news source Haaretz.

The report revealed systematic discrimination directed at refugees with the intent of coercing their will to leave Israel, with Israeli authorities perceiving Eritreans and Sudanese refugees as a ‘threat’ and branding them as ‘infiltrators.’

Methods to push refugees from staying in Israel have included indefinite detention, obstacles to accessing Israel’s asylum system, the rejection of 99.9 percent of Eritrean and Sudanese asylum claims, ambiguous policies on being allowed to work, and severely restricted access to healthcare, according to Human Rights Watch.

In response to the HRW report, a spokeswoman from the Population and Migration Authority released a statement arguing that Israeli refugee policies were legal.

‘Israel acts legally and in an appropriate and proportional manner in order to deal with the phenomenon of illegal infiltrators,’ the statement read. ‘The growth in number of those leaving Israel of their own will is three times higher in 2014 than in 2013. This proves the policy is effective.’

The UN says there are some 53,000 refugees and asylum-seekers in Israel, most of whom entered via the desert border with Egypt.

In 2013, Israel launched a crackdown on what it said were 60,000 undocumented African migrants, rounding up and deporting 3,920 by the end of the year, and building a hi-tech fence along the border with Egypt.

Israeli authorities opened the Holot detention camp in the southern Negev desert as part of the 2013 crackdown on undocumented migrants, with the facility open by day but locked down at night.

Under legislation passed by parliament in December 2013, Israel can detain undocumented migrants for up to a year without trial. The law was slammed by the UN refugee agency which said Israel could be in breach of international law.

Speaking on the Israel Population and Immigration Authority’s proposed policy, Interior Minister Gilad Erdan told Israeli news sources: ‘The move will encourage infiltrators to leave the State of Israel in a safe and dignified manner and will effectively fulfill our duty toward the citizens of Israel and south Tel Aviv, who will be able to return the fabric of life they were used to.’

‘They will receive fair treatment in the countries set to absorb them.’