The Freedom Flotilla is Back! 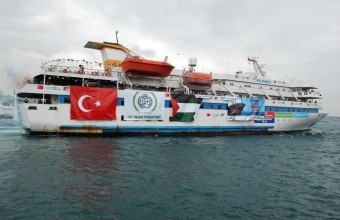 Former Tunisian President Marzouki will participate in the initiative to break the siege on the Palestinian enclave. It’s the third time since 2010, when the Israeli navy stopped the fleet with a raid in which nine activists were killed.PNN reports that a new Freedom Flotilla is ready to sail for Gaza in the coming months and on board there will be also the former Tunisian President, Moncef Marzouki. The report comes from the organization of the flotilla, that will be attended by politicians, religious, leading figures in economy and culture, said the director of the Palestinian Forum in Britain, Ziad al Aloul.

Marzouki, who has had a past as an activist for human rights, has led Tunisia from 2011 to 2014, during the transition period that followed the revolts of the Arab Spring. His is one of the first accessions, announced during the Social Forum that has just ended in Tunisia.

There is no exact date for the departure of the fleet that will attempt to break the siege of the Gaza Strip, but the organizers hope to sail by the summer, with at least three ships.

In 2010 the flotilla was stopped by the Israeli navy while sailing in international waters. The military opened fire on the Mavi Marmara ship, killing nine activists, including eight Turkish citizens. The result was a rupture of diplomatic relations with Ankara.

Subsequently, there have been other attempts to break the blockade of Gaza by sea. In 2011 a fleet was ready to sail from Greece, but Israeli pressure made sure that Athens would prevent ships from leaving.

The Palestinian embargo on the enclave began in 2007, when the Islamic movement Hamas took power in Gaza. Since then, the bloc has deteriorated the living conditions of the inhabitants of the Gaza Strip, which have worsened since the last Israeli military offensive, last summer.

Gaza’s Ark solidarity ship was totally destroyed in the assault.

The UN agency for Palestinians (UNRWA) has spoken of an ’embargo’ referring to the future of the Palestinians trapped in this strip of land, which is considered an open-air prison.