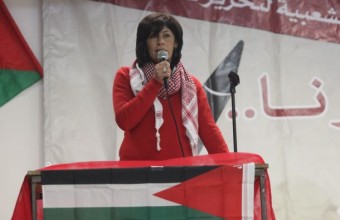 On behalf of the PLO Executive Committee, Dr. Hanan Ashrawi strongly condemned the recent arrest of Palestinian Legislative Council (PLC) Member and a member of the political leadership of the PFLP, one of the PLO’s constituent factions, Khalida Jarrar.’It is obvious that her arrest is politically motivated and a violation of her parliamentary immunity, and Israel should respect international norms regarding the immunity of elected officials,’ Ashrawi said in a statement.

Currently, there are 18 PLC members who are imprisoned in Israeli prisons, 9 of whom are being held under the extreme and unjust practice of administration detention, the Palestinian News Network (PNN) has reported.

‘We demand the immediate release of Khalida and all imprisoned PLC members,’ Ashrawi continued, ‘and we call on all members that are signatories to the Fourth Geneva Convention to hold Israel accountable for its blatant violations of international law, including the arbitrary arrests of Palestinians and the torture of Palestinian prisoners in Israeli jails, Israel’s continued use of administration detention and solidarity confinement, the ill-treatment of Palestinian men, women, children, and elderly, and the constant prevention of visitations by family members. Israel is not above the law, and it must not be given carte blanche to dehumanize the Palestinian people and systematically devalue their basic rights and lives.’

Israeli authorities ordered Jarrar’s deportation from her home in Al-Bireh to Jericho last August. However, she did not bind to the command and therefore it was overturned about two months ago.

Qaddura Faris, head of the Palestinian prisoners’ club said that the kidnapping of the MP was an act of revenge, since she broke the word of Israeli military who ordered her being deported to Jericho last year.

Faris, in a statement which PNN received, said that Israeli authorities have no charges or evidence which can be used to drag Jarrar to any kind of court. Instead, it showed how flagrantly Israel violates the law, and this comes in synchronization with Palestine becoming an official member at the ICC.