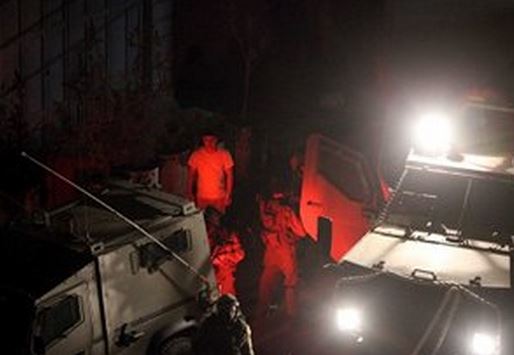 Israeli soldiers kidnapped, Sunday, five Palestinians in the occupied West Bank, including a teenager living in an orphanage, and occupied at least two homes in Hebron, before using them as military posts, and monitoring towers.Media sources in the northern West Bank city of Tulkarem have reported that the soldiers invaded an orphanage, housing 50 orphans, including children, and kidnapped Ibrahim ‘Issa Silmi, 18 years of age.

The orphanage administration said Israel recently ordered the orphanage manager to head to a military base for interrogation, and that the army kidnapped, Thursday, two orphans identified as Waseem at-Taj, 18, and Maher Hussein Fa’atawy, 16, on a military roadblock near Qalqilia.

In addition, soldiers invaded the West Bank city of Bethlehem, and kidnapped Ahmad ‘Ata al-Hreimi, 25, from his home, while former political prisoner Rabea’ Mohammad Shamroukh, 33, was kidnapped from his home in the Deheishe refugee camp, south of Bethlehem.

Clashes took place in the city and the Deheishe refugee camp, while many residents suffered the effects of tear gas inhalation.

he soldiers also invaded the home of Rasmi Dofash, and kidnapped his son Bara’, 22 years of age.

In addition, soldiers invaded two homes in the al-Baq’a and the Wadi al-Jouz area, east of Hebron, and used them as military posts and monitoring towers.

The WAFA Palestinian News Agency said the soldiers invaded the home Salem Salayma, in the al-Baq’a area, east of Hebron, and handed him a military order informing him the soldiers will be using his home, and rooftop, as a military post and monitoring tower.

The home is located close to the Kharseena illegal colony, built on Palestinian lands.

The soldiers also invaded a home, belonging to members of the Shabana family in Wad al-Jouz area, and used it as a military post and monitoring tower. The property is close to settlement road #60.

Members of the two families were imprisoned in their own homes, and were not allowed any contact even with their neighbors.

Dozens of soldiers were also deployed near the Keryat Arba’ settlement bloc, in Hebron, especially in Palestinian neighborhoods, farmlands and agricultural roads.

On Saturday evening, soldiers attacked a Palestinian child, identified as Qamar ‘Adel Qfeisha, 11 years of age, after Israeli extremists sprayed her face with pepper spray in the Shuhada Street, in the center of Hebron city.

She was standing in front of her family home when she was attacked, and received treatment by local Palestinian medics.