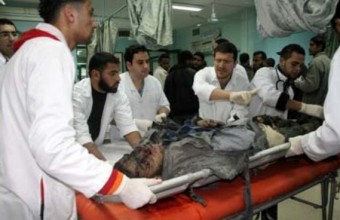 Two citizens, on Sunday, were critically injured due to a leftover missile explosion East of Al-Shuja’eyya neighbourhood in Gaza. The same neighborhood was flattened by Israel last summer.According to the PNN, the two injured were on farmland near Al-Mintar crossing, east of the city, when the missile exploded.

They were moved to Al-Shifaa medical center. Medics reported one as severely critical, and the other as critical.

In the last war on Gaza, Israeli Military dropped numerous missiles and related devices which hadn’t exploded at the time, but have caused 5 deaths and 7 injuries since.

‘Operation Protective Edge’ saw the deaths of about 2,200, injured 11,000 and displaced 100,000 Gazans. Palestinians are now the largest refugee group in the world, according to UN statistics.