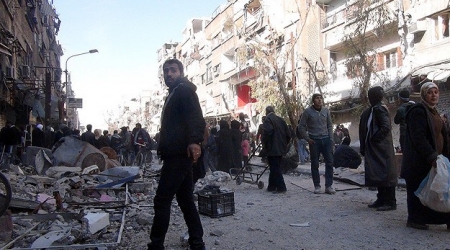 The Palestinian Liberation Organization (PLO) has moved some 2,000 Palestinians from Syria’s flashpoint Yarmouk refugee camp, a PLO official said, Sunday.World Bulletin reports, via Al Ray Palestinian Media Agency, that Ahmed Magdalani, who oversees Yarmouk camp in the PLO, said that his organization was conducting an emergency plan for Palestinians inside Yarmouk, after ISIL seized parts of the camp over the past few days.

‘The [PLO] plans on relocating as many residents as possible while working on facilitating the entry of food and medical supplies inside the camp,’ Magdalani said.

He also said that he will visit Damascus on Monday, to monitor the situation in Yarmouk from there.

Violence has flared up inside the camp, which accommodates tens of thousands of Palestinian refugees, since Wednesday when ISIL members stormed it and clashed with Aknaf Beit Al-Maqdis militant group.