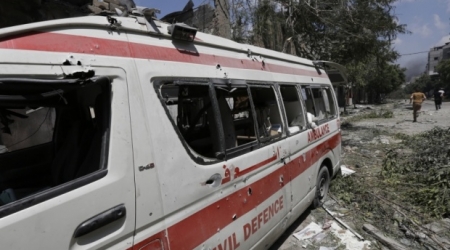 The Palestinian Red Crescent Society, Monday, condemned the targeting of one of its hospitals in Syria’s beleaguered Al-Yarmouk Refugee Camp with a missile, resulting in the injury of three of its voluntarily staff and excessive damage to the building.WAFA Palestinian News & Info Agency reports that the society, via press release, denounced the targeting of its medical staff during the ongoing conflicts in the camp, which since the start of the conflict have resulted in the death of seven staff members, including the assassination of Hamas official Yehya Horani, last week, and dozens of injury cases.

On April 4, the Palestinian Presidency Saturday urged to avoid dragging the Palestinian refugees in Yarmouk Refugee Camp in the fighting that is taking place among various armed groups.

The ‘Islamic State’ (IS) group fighters have reportedly taken control of 90% of the Palestinian refugee camp, located on Damascus’ outskirts, as gun battles have continued to rage between this group and various Palestinian groups since last Wednesday.

After being initially pushed back by various fighting groups, IS group made fresh advances since Thursday and has reportedly seized control of the square where the camp’s 18,000 residents usually gather to receive aid handouts.

Meanwhile, UNRWA denounced the events taking place in the camp, demanding “from all parties respect for and compliance with their obligations to ensure the protection of civilians in Yarmouk.”

UNRWA further demanded an end to the fighting and a return to conditions that will enable its staff to support and assist Yarmouk’s civilians.