Around 150 Trees Cut By Near Bethlehem 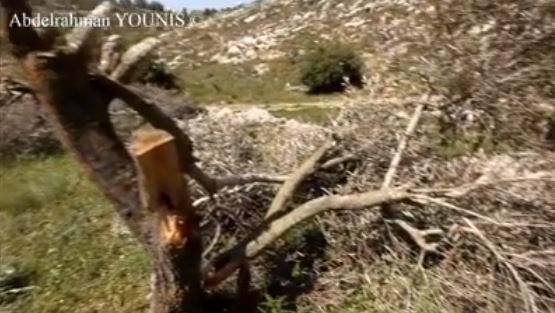 A group of Israeli extremists invaded Palestinian olive orchards in the al-Jab’a village, near the West Bank city of Bethlehem, for the fifth time in a row, and cut more than 150 olive trees belonging to the villagers.Resident Mahmoud Masha’la, a teacher in a local school in Husan nearby town, said the villagers depend on their orchards as their main source of livelihood, the Quds News has reported.

“This if the fifth attack in a row, they are waging a war not only on us, but on our daily bread, our livelihood,” Masha’la said, “They repeatedly attack our lands and orchards, my orchards, my cousins, and many other villagers; this is a systematic policy.”

“We really do not know what to do; this is an ongoing war, ongoing aggression,’ he added, “We appeal our officials to intervene, and expose the Israeli crimes.”