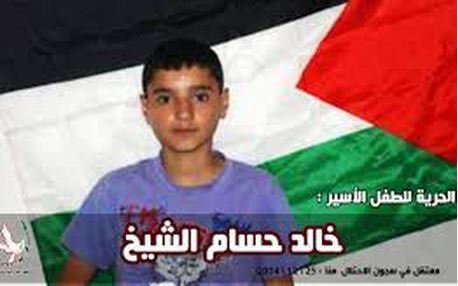 The Israeli Authorities issued a permit for the family of child detainee Khaled Sheikh allowing them to visit their detained son, for the first time, on May 7 2015, although the child is scheduled to be released on April 24, 2015.The Head of the Census Department of the Palestinian Committee of Detainees, and a member of its follow-up committee in the Gaza Strip, Abdul-Nasser Ferwana, said the permit was granted to Khaled’s mother and his brothers.

Ferwana added that Israel continues to violate the rights of all detainees, especially imprisoned children, and their families, in direct violation of International Law,

“Khaled, 15 years of age, will be released on April 24; the permit is for May 7” the family of the detained child said, “This is another method Israel uses to prevent the families from visiting with their detained loved ones.”

The family called on local and international legal and human rights organizations to intervene, ensure the release of their child, and all detained children.

Sheikh is from Beit ‘Anan, in occupied Jerusalem; he was kidnapped by the soldiers next to his family home, on December 25, 2014.

On Wednesday February 25, an Israeli court sentenced the child to four months imprisonment, and 2000NIS fine. The child suffers from anemia, and several health complications.