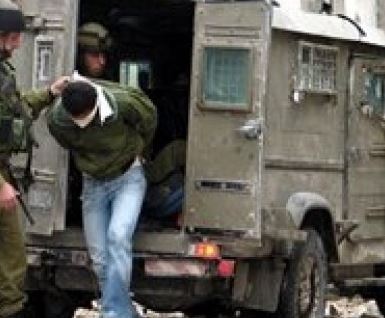 Israeli soldiers invaded, on Wednesday at dawn, Beit Ummar town, north of the southern West Bank city of Hebron, and kidnapped two former political prisoners; one Palestinian was kidnapped on Tuesday evening in Hebron City, and a young man from Jenin was kidnapped from his work site in Haifa.Several military jeeps invaded Beit Ummar before storming and searching a number of homes, causing property damage and terrifying the families, and kidnapped two former political prisoners.

The two kidnapped Palestinians have been identified as ‘Ala Fahmi az-Za’aqeeq, 33, and Ismael Issa Sleibi, 30 years of age.

In addition, soldiers invaded the southern area of Hebron city, including the Tareq Bin Ziad Junction, and the Schools area, and clashed with many Palestinians.

Scores of Palestinians, including children, suffered the effects of tear gas inhalation, as the soldiers fired gas bombs into schools, and a number of homes.

The Youth Coalition against Settlements, in Hebron, said Dweik was trying to cross the roadblock while heading back home in Tel Romeida neighborhood.

The soldiers asked him to remove his belt while searching him using a metal detector, and kidnapped him after attacking and beating him when he refused to do so.

In related news, soldiers kidnapped a Palestinian from Burqin town, west of the northern West Bank city of Jenin, while working in Haifa.

Eyewitnesses said the soldiers kidnapped Mohammad Nasser Khadour, 23 years of age, and took him to an interrogation facility.

The soldiers inspected his ID card and informed him “they have a security file on him.”

Meanwhile, Israeli army sources said the soldiers arrested nine Palestinians in different parts of the occupied West Bank, especially in ar-Ram town, north of Jerusalem, and in Hebron, and that some of the detained Palestinians are members of Hamas.