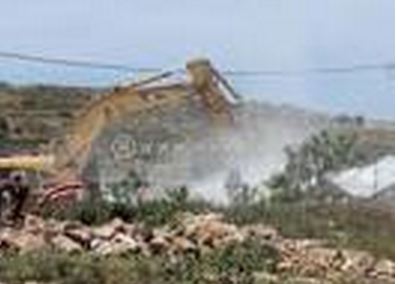 Head of the Local Council of the al-Khader town, south of Bethlehem, has reported, Thursday, that a group of Israeli extremists from an illegal Israeli outpost started digging a road on Palestinian lands to link it with their outpost.The mayor, Tawfiq Salah, said the assailants starting digging the road in Ein al-Qassis area, near their illegal Sidi Boaz outpost.

Salah added that local residents noticed the attackers, and managed to stop them after they leveled nearly 200 meters of lands.

The official said that completing this road would lead to the illegal annexation of an entire mountain of approximately 400 Dunams (98.84 Acres) of Palestinian lands, and would also lead denying the Palestinians access to their lands in Wadi al-Ghaweet area.

The area has been subject to frequent attacks that also included illegal annexation of lands, assaults on farmers, and uprooting dozens of trees.

Israel has been trying to illegally annex large areas of Palestinian lands, especially since al-Khader is near the Jerusalem-Hebron road, as Tel Aviv is aiming at using the lands in its so-called “Greater Jerusalem” colonialist project that extends, in this area, to the northern parts of the southern West Bank city of Hebron.