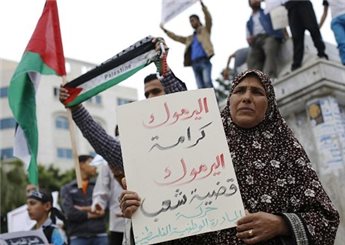 A group of 14 Palestinian factions said, on Thursday, that they backed a joint military operation with the Syrian government to expel Islamic State group militants from the Yarmouk refugee camp in southern Damascus.After a meeting of the factions in the Syrian capital, PLO official Ahmed Majdalani said that the groups supported a coordinated military effort in the camp.

The factions support ‘a security solution that will be carried out in partnership with the Syrian state and will have as its priority maintaining the security of citizens,’ he said, according to AFP.

‘We agreed that there would be permanent cooperation with the Syrian leadership and the formation of a joint operations room with Syrian government forces and the Palestinian factions that have a significant presence in the camp or around it.’

Majdalani added that Palestinian forces would work in an ‘integrated’ fashion ‘with the Syrian state to clear the camp of terrorists.’

But it was unclear whether that position was shared by the Palestinian fighters on the ground inside the camp.

Fighters of a Hamas offshoot, Aknaf Beit al-Maqdis, however, joined some civilians in defending the camp, according to Farouk al-Rifai, a spokesman for the Palestinian civil society network in Syria.

Aknaf Beit al-Maqdis was not present at Thursday’s meeting and could not be reached for comment.

The group is opposed to the Syrian government and has cooperated with rebel fighters against IS militants inside Yarmouk since the extremist organization entered the camp on April 1.

The IS attack is just the latest blow for Yarmouk, which was once a thriving, working-class residential district of the capital, home to some 160,000 people, Syrians and Palestinians, most of which have fled.

Prior to the IS invasion, the camp was under a nearly-impenetrable government siege that left around 200 dead due to malnutrition and lack of medication, according to the Syrian Observatory for Human Rights.

Only 18,000 were left in the camp when IS arrived last week, and hundreds more have evacuated.

The deteriorating humanitarian situation in the Yarmouk camp pushed the UN Security Council to demand humanitarian access Monday to residents trapped between the encroaching IS militants and besieging government forces, UNRWA chief Pierre Krahenbuhl describing the situation as ‘more desperate than ever.’

Several political factions marched in Gaza on Thursday to express solidarity with the besieged camp.

‘We say it for the thousandth time: hands off the Yarmouk camp, hands off our people, hands off the slaughtered, killed and starved,’ senior Hamas official Salah al-Bardawil said during the rally.