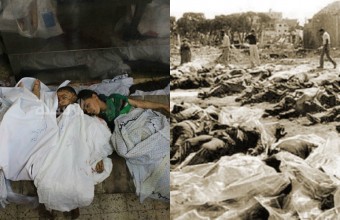 On April 9, sixty-seven years ago, armed members of Zionist terrorist organizations, the Irgun and the Stern gangs, attacked the Palestinian village of Deir Yassin and brutally murdered more than one hundred innocent men, women and children. PNN reports that mostly all under the age of nine, fifty-five young children were orphaned and literally dumped in the Old City of Jerusalem to fend for themselves; Hind al-Husseini rescued the children and founded Dar Al-Tifl Al-Arabi (Arab Children’s House), an orphanage for the young survivors, two weeks later.

‘The Deir Yassin massacre was a turning point in the history of the people of Palestine, and it continues to serve as a necessary reminder of Israel’s ongoing policies of displacement, dispossession and dehumanization, and its willful erasure of the Palestinian narrative and human presence in historical Palestine,’ PLO executive committee member Dr. Hanan Ashrawi said in a statement.

Ashrawi gave recent examples of Israel’s continued campaign of deliberate massacres which occurred last summer when it waged a brutal and ruthless assault on the Palestinians of Gaza. ‘On July 20, at least sixty Palestinians were murdered in the Shuja’eyya neighborhood, and between July 7 and August 21, one hundred and forty-two families in Gaza were partially or completely obliterated by Israel.’

‘Since its creation, Israel’s systematic policies of destruction and massacres have persisted,’ Ashrawi added. ‘Deir Yassin, Nasir al-Din, Haifa, Yazur, Bayt Daras, al-Tantura, al-Lydd, al-Dawayima, Saliha, Qibya, Kafr Qasim, and Shuja’eyya, among other names, will remain forever engraved in our hearts and minds and always serve as symbols of Palestinian steadfastness and perseverance.’

‘Today, we honor all Palestinian victims of Israel’s flagrant measures of military occupation, apartheid and ethnic cleansing. On behalf of Palestinians everywhere, we will remain undeterred in our efforts to hold Israel accountable for its violations of international law and war crimes. Peace and justice for Palestine is long overdue, and it is time for the international community to join us as we strive for freedom, dignity and self-determination,’ she concluded.

The Massacre of Deir Yassin: Atrocity, Displacement and Impunity

Even before the withdrawal of British forces from Palestine in 1948, Palestinians throughout the country were subjected to widespread terror and horrific acts of violence at the hands of Zionist militias. Massacres and expulsions of Palestinians created an atmosphere of fear and panic that forced hundreds of thousands from their homes. They left behind land and personal possessions that were subsequently stolen by the State of Israel, sometimes out rightly and sometimes through ‘clever’ legislation. One episode that characterizes the atrocities of the Nakba (catastrophe), and highlights the impunity that Israel still enjoys today, is the massacre that took place in the village of Deir Yassin in Jerusalem. Today, we mark the 65th anniversary of this crime.

What happened in Deir Yassin?

On April 9th 1948, Zionist gangs entered the Palestinian village of Deir Yassin in the Jerusalem district, killing 254 Palestinian villagers, mainly women, children and the elderly. There were documented cases of rape, mutilation and humiliation; the victims being mainly Palestinian women. As stated in the subsequent Red Cross report made by ICRC representative Jacques de Reynier, British troops did not intervene to prevent the massacre and Zionist gangs denied access for medical personnel to treat the wounded.

Who committed the massacre?

The massacre was led by Menahem Begin in his capacity as head of the Irgun terrorist forces (The Irgun were responsible for several acts of terror, including the blowing up of the King David Hotel in Jerusalem). Supporting the Irgun was the Haganah, a group that went on to form the basis for the Israeli Army, and the Lehi, led by Yitzhak Shamir.

Was Deir Yassin an isolated event?

No. Deir Yassin was not an isolated event. It was part of the ‘Dalet Plan’, which aimed to force Palestinians from Palestine in order to achieve a Jewish majority in the newly established State of Israel.

How did Deir Yassin affect Palestinians?

News of the Deir Yassin massacre created a wave of panic, forcing many Palestinians to flee their homes so as to avoid a similar fate. The Zionist militias had succeeded in achieving an important and stated goal. As Menahem Begin would note several years later:

‘Arabs throughout the country, induced to believe wild tales of ‘Irgun butchery’ were seized with limitless panic and started to flee for their lives. This mass flight soon developed into a maddened, uncontrolled stampede. Of the almost 800,000 who lived in the present territory of the State of Israel, only some 165,000 are still there. The political and economic significance of this development can hardly be overestimated.’

What happened to the survivors of Deir Yassin?

Those who survived the massacre became refugees either in Jordan or in camps around the Jerusalem area, such as Qalandia near Ramallah and Deheisheh in Bethlehem. Many of their descendants are still living in refugee camps today.

A group of orphans were rescued by Ms. Hind Husseini. The orphans were highly traumatized after seeing their families being slaughtered and needed of immediate shelter. This led Ms. Husseini to create the Dar Al Tifl, a Palestinian institution in Jerusalem that still grants shelter and education to Palestinian children. This tragic story inspired the film ‘Miral’ by Rula Jibreel.

What happened to the perpetrators of the massacre?

As with almost every single crime committed by Israel before and since its inception, the criminals responsible for this horrific and bloody massacre enjoyed full impunity. In fact, a few weeks after this tragic event, the man politically responsible for the Haganah (future Israeli Army), David Ben Gurion, became Israel’s first Prime Minister. Even more astonishing is the fact that the head of the ‘operation’ at Deir Yassin, Menahem Begin, and Yitzhak Shamir, the leader of the Lehi who participated in the massacre, would also go on to become Israeli Prime Ministers.