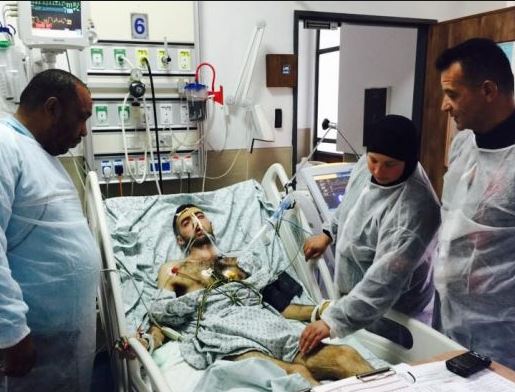 Palestinian Medical sources reported on Friday that former political prisoner, Ja’far Ibrahim ‘Awad, 22 years of age, died in a Palestinian hospital in the southern West Bank city of Hebron, due to serious complications resulting from a lack of specialized medical treatment, and medical maltreatment, while held in an Israeli prison.The sources, in the al-Mezan Specialized Hospital in Hebron, said ‘Awad was moved to the Intensive Care Unit after his release from an Israeli detention center three months ago, after suffering serious health complications.

Head of the Hebron Office of the Palestinian Prisoners Society Amjad Najjar said ‘Awad died approximately at 2:45 am Friday.

Najjar held Israel fully responsible for Awad’s death, and said this was “a calculated crime, part of Israel’s crimes against the detainees.”

He added that, in recent years, Israel freed a number of detainees after they became seriously ill, and most of them died shortly after their release.

“Those detainees are taken from Israeli prisons to hospitals,” he stated, “By the time there are hospitalized their conditions are terminal, and they die shortly afterwards.”

Talking to the IMEMC, the Head of the Census Department of the Palestinian Committee of Detainees, and a member of its follow-up committee in the Gaza Strip, Abdul-Nasser Ferwana, held Israel fully responsible for Awad’s death, especially since the Prison Authority refused to release him until his death was imminent.

“Awad is not the first detainee to face this fate; he is one of dozens that died shortly after their release due to similar conditions,” Ferwana told the IMEMC, “His death should bring more attention to the more than 1500 detainees who are currently ill in Israeli prisons and denied specialized medical treatment.”

The official further called for a thorough investigation into Awad’s death, and into the dire conditions, especially the health conditions, of Palestinian detainees held by Israel.

He added that Awad’s death is yet another reason why the Palestinian leadership needs to head to the International Criminal Court (ICC) to prosecute Israel for crimes against the Palestinian people.

Former Detainee In Coma; Abbas Orders His Transfer To A Hospital In Germany
http://www.imemc.org/article/71176