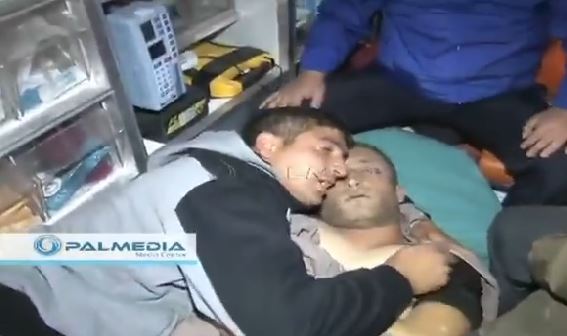 Israeli soldiers shot and killed, on Friday afternoon, a young Palestinian man during the funeral ceremony of a former detainee, who was denied access to proper medical attention, while being held by Israel, and died approximately at 2:45 am Friday.Medical sources said resident Ziad ‘Omar ‘Awad, 28 years of age, died by live Israeli army fire in Beit Ummar town, near the southern West Bank city of Hebron.

The soldiers attacked the Palestinians, during the funeral procession of former political prisoner, Ja’far Ibrahim Awad, 22.

Thousands of Palestinians from Beit Ummar, and various areas of the occupied West Bank, participated in the massive funeral procession that started in front of the Big Mosque in Beit Ummar.

They marched carrying Palestinian flags, and posters of the Ja’far, before the soldiers used excessive force against them.

The attack led to clashes with local youths, who hurled stones on them and their armored military vehicles.

Ziad ‘Awad died in a Palestinian ambulance shortly after his injury, while many residents were moved to local hospitals, including some who suffered serious injuries, the Hebron News has reported.

Three Palestinians were shot with live rounds, around 10 with rubber-coated metal bullets, and scores suffered the effects of tear gas inhalation.

The protesters held Israel fully responsible for the death of the former detainee, and demanded holding it accountable for its ongoing crimes against the Palestinian people, including all political prisoners facing constant assaults, harassment and abuse in addition to being denied access to professional medical treatment.

They called for forming an independent International Committee to investigate the Ja’far’s death, especially since he was denied access to the urgently needed and specialized, medical treatment, an issue that eventually led to his death following major complications.