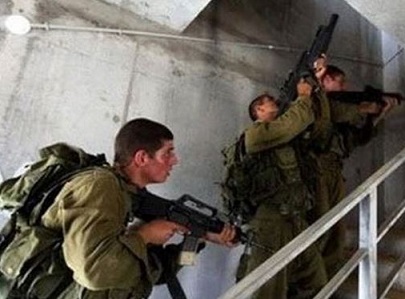 Israeli soldiers invaded, on Sunday at dawn, a number of Palestinian communities in the occupied West Bank, and kidnapped five young men.The Israeli Radio said the soldiers arrested one Palestinian for what the army claimed “conducting attacks against soldiers and settlers,” and two others for being “members of the Hamas movement.”

It added that the arrests took place in Beitello and Deir Samet villages, near Ramallah, and in the southern West Bank district of Hebron.

One of the kidnapped Palestinians has been identified as Hasan Yosri al-Hroub, 22, from Deir Samet, near Hebron.

Soldiers also invaded the village of Salem, east of the northern West Bank city of Nablus, and kidnapped two Palestinians.

Several armored military vehicles invaded the village before the soldiers broke into and searched a number of homes, and kidnapped Tahsin Karkary and Bassel ‘Issa.

The owners of the invaded homes are Ahmad, Anwar and Munir Khalil Thawabta.

On Saturday, Israeli soldiers opened automatic fire on Palestinian farmlands east of Rafah, and east of ‘Abasan al-Kabeera area, in Khan Younis, in the southern part of the Gaza Strip, forcing the resident out of their lands, while many suffered anxiety attacks.