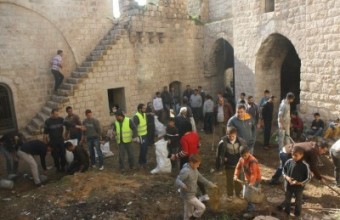 Israeli settlers from Leshem colonial settlement, west Salfit, today, have taken over the historical village, Deir Sim’an, on the lands of Kafr Deek and Rafat. Israeli housing minister, Uri Ariel, has vowed to open Mount Ebal, in Nablus, for settler religious rituals.Deir Siman castle dates back to the Roman Era and is held to be a very important Palestinian landmark, the Palestinian News Network reports. It is located a few kilometers west of Kafr Deek village. It has been controlled and isolated by Israeli occupation forces, which now dominate more than 1,000 dunums in the area.

Eyewitnesses said that Israeli settlers are using bulldozers and working around the clock to make roads to the castle, in addition to erecting walls around the village.

For his part, researcher Khaled Ma’ali said that the site has been under threat since the announcement of Leshem settlement in 2012. Settlers now surround the village from all directions, and it cannot be reached unless through a route that the settlers made from the south.

Ma’ali pointed out that occupation forces plan on stealing this site which counts as one of the most beautiful features of Palestine, as happened before with the religious sanctities of Kafr Hares, which they claimed they affiliate to ‘prophets from the old ages.’

Ma’ali assured that the International Criminal Court will consider this theft and damage to the archaeology, and that it rises to the level of war crimes.

Ariel, during a visit on Friday to the mount, said that he will coordinate with the military and other ministries, to let the settlers reach the top for prayers, claiming that the mountain was a holy place in historic Judaism.

The settlers will be transported by wheel-drive vehicles, and the roads will be fixed to ease the journey for them.

Ebal mountain is one of the highest peaks in the Palestine and rises to 3,084 feet (940 meters) above sea level. The mountain has been occupied by Israel since the 1948, and is marked by a military camp built decades ago. 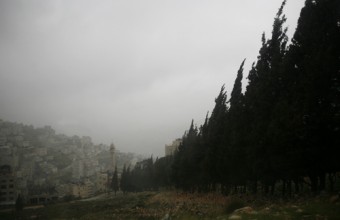