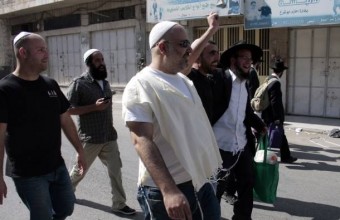 Israeli settlers who stormed Al-Aqsa Mosque yards under Israeli police protection, on Saturday, assaulted a number of Palestinian female worshippers, according to witnesses.Witnesses said that Palestinian worshippers were attacked by settlers after attempting to fend off the former’s attempts to tour the yards of the mosque, WAFA Palestinian News & Info Agency has reported. Settlers assaulted a number of women carrying copies of the Quran and used foul language against them.

Israeli police impose restrictions on Palestinian worshipers’ entry, particularly women and youth. Police retains their identity cards prior to their entry in anticipation of any clashes and to be able to detain those who might be involved.

The city of Jerusalem has been a scene of ongoing violent and deadly incidents which skyrocketed following Israeli settlers’ murder of 17-year-old Palestinian teenager Mohammad Abu Khdeir, who was found torched to death in a wood in Jerusalem, last July. Since then, violent incidents caused loss of life on both Palestinian and Israeli sides.

Also on Sunday, an Israeli settler ran over a Palestinian female near one of the gates of Al-Aqsa mosque, before fleeing the scene.

The settler ran over a female, who currently remains unidentified, while she was standing at the light railway stop located near the mosque’s Bab al-Amoud gate, also known as Damascus Gate, in East Jerusalem, before fleeing the scene.

She was transferred to a nearby hospital for treatment, where her medical condition remains unknown. Whereas Israel deals with Israeli cars crashing into Palestinian pedestrians as traffic accidents, it considers similar incidents by Palestinians as ‘terrorist attacks’, upon which shooting and killing orders are easily taken, depriving Palestinians of the right to a fair trial.

On October 23, 2014, Israeli police shot and killed a Palestinian after his car hit a group of Israelis standing at a train station in the Jerusalem neighborhood of Sheikh Jarrah; police fired the first bullet, which brought the driver, Abdul-Rahman Shaloudi, 20, to a halt, then fired another bullet after which he fell to the ground.

Another three bullets followed and were shot at Shaloudi even though he was lying on the street, unarmed, injured, and unable to move, leading to his imminent death minutes later.

The incident was declared by the Israeli side as “a terrorist act.”

In contrast, on October 19, an Israeli settler deliberately ran over two Palestinian kindergarten girls near Ramallah, killing one of them and seriously injuring the other, yet there were no reports of any police action against him. The Israeli side dealt with the incident ‘an unintentional’.

Israel declares such incidents, when committed by Palestinians, as ‘terror acts’ without concluding proper investigations and most of the time shooting the person behind the incident at the spot, depriving him the right to defense in a court of law.

Zakaria Julani, 13-year-old boy from Silwan neighborhood of Jerusalem, was treated at Hadassah Ein Kerem hospital after he was injured with a rubber bullet in his eye on March 31, 2015, when he was heading home after he got off school.

According to the Wadi Hilweh Information Center – Silwan, the child’s father Yehya Julani explained that his son was injured with a rubber bullet in the eye after he left the UNRWA school and was heading home.

Witness reports said that Zakaria was surprised when the snipers stationed in “Shweiki” building established across from the military crossing in Shu’fat refugee camp randomly fired rubber bullets towards the students when there were no clashes in the area; Zakaria was injured in his left eye.

Yehya added: “My son was transferred to a clinic near the crossing and was then transferred in an ambulance to Hadassah Ein Kerem hospital where he underwent a surgery to stop the bleeding in his left eye.”

He added that the Israeli police arrived at the hospital to investigate the incident and confirmed that there were no clashes at the refugee camp on that date.

Zakaria’s father explained that he checked the surveillance camera in the area which also showed no clashes at the time of his son’s injury.

Wadi Hilweh Information Center identified two children that were injured with rubber bullets fired by Israeli snipers stationed in “Shweiki” building in the past two weeks. The first is Zakaria Julani, and the second child was an eight-year old who was injured in the head.

Meanwhile on Sunday, Israeli forces broke into the village of Beit Fajjar, to the south of Bethlehem and raided and searched resident’s homes, said security sources.

WAFA has been informed that a large military force broke into the village in the early morning and raided three houses belonging to three brothers, who were identified as Ahmad, Anwar and Muneer Thawabta. No arrests were reported.