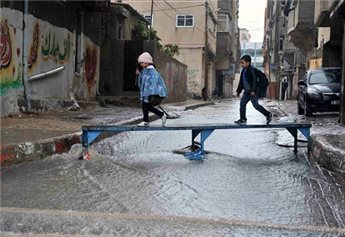 Heavy rain has flooded low-lying areas across the Gaza Strip, including Khazaa and Beit Hanoun, where thousands of Gazans displaced by the Israeli offensive last summer are living in caravans.Civil Defense spokesman Muhammad al-Midana told Ma’an News Agency that a number of homes in the neighborhood of Kunz Street and Shabia Street, in Gaza City, had been flooded and that the Civil Defense had removed swamped cars inside the city and the northern Gaza Strip.

He also said that Civil Defense crews evacuated a school when water levels rose sharply in the surrounding area, putting the school at risk of flooding.

He said that there had been no reported injured.

Meanwhile, witnesses in the low-lying area of Khazaa east of Khan Younis said that a number of caravans housing displaced Gazans had been swamped. There were similar reports from Beit Hanoun.

Gaza has been hit by severe flooding in the past.

UNRWA said: ‘The flooding is exacerbating the already dire humanitarian situation in Gaza caused by blockade and the unprecedented destruction from the latest Israeli offensive.’

The year before, in December 2013, heavy rain caused the displacement of more than 40,000 across the Gaza Strip.

The floods are exacerbated by a chronic lack of fuel that limits how much water can be pumped out of flood-stricken areas.

The fuel shortages are a result of the eight-year-old Israeli blockade, in place since 2007, which also limits the import of other kinds of machinery related to pumping and sewage management that Gazans require to combat the floods.