Leftist Legislator, Jarrar, To Be Tried On 12 “Charges” 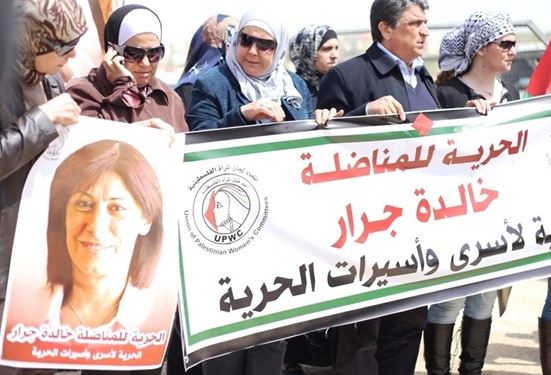 The Israeli prosecutor’s office filed to the ‘Ofer Military Court an indictment of twelve charges against leftist Palestinian Legislator, senior social and feminist figure, Khaleda Jarrar, who recently received a six-month Administrative Detention order without charges.The “charges” filed against her include “membership with the Popular Front for the Liberation of Palestine (PFLP), holding a senior position with the PFLP, “conducting activities on behalf of the PFLP,” and “incitement meant for the abduction of soldiers” to conduct prisoner swap agreements to secure the release of Palestinian detainees, including PFLP Secretary-General Ahmad Saadat.

The military prosecutor intends to ask the court to remand Jarrar until a ruling is made, although she is already imprisoned under Administrative Detention.

The Maan News Agency said that several international officials and diplomats, including a representative of Amnesty International, representatives of the International Association of Democratic Lawyers (IADL,) and her defense team, headed by attorney Mahmoud Hassan, attended the court hearing, Monday.

Her husband, Ghassan Jarrar, said Israel decided to hold his wife under arbitrary Administrative Detention orders because they have nothing on her, and now the prosecution is just trying to come on with its own version of excuses and justifications to keep her imprisoned.

He added that holding Jarrar captive is illegal, and the court has no legal jurisdiction, especially since it is a military court representing the military occupation of Palestine.

Several Palestinian legislators and officials denounced the abduction and imprisonment of Jarrar, and said Israel insists on escalating its crimes and violations against the Palestinian people, and their elected officials.

They said that holding elected legislators and officials captive is a direct violation of International Law, and all related resolutions, and that Israel continues to violate the Fourth Geneva Convention, and continues to hold democratically elected officials.

Yuav, an Israeli activist who participated in the protest in front of the Ofer Court, said Israel must release all elected legislators, ministers, officials and every Palestinian detainee.

He added that many Israelis are against the ongoing occupation of Palestine, constant aggression and violations, and called for ending this occupation.

On April 2, the Palestinian Prisoners Society (PPS) said Israel is holding captive sixteen legislators, including nine who are imprisoned under Administrative Detention orders.