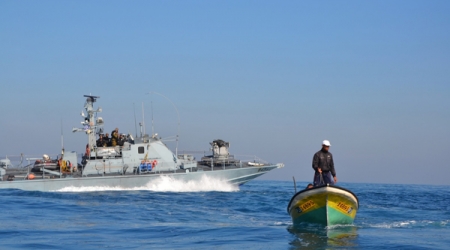 Ayyash added that the Israeli navy commits more than three violations against fishermen each day.

Israeli forces routinely attack Gazan fishermen and their fishing boats in the context of Israel’s closure of the Gaza Strip, which includes restrictions on the fishing zone, depriving members of the fishing community of their right to work and putting fishermen’s lives and wellbeing at serious risk.

The attacks include violations on the right to livelihood, harassment and shooting, arbitrary arrest and detention involving abuse, as well as the confiscation of property, including fishing boats and nets.

Soldiers reputedly use cruel, inhuman and degrading treatment during fishermen detentions. In 2013, they carried out 147 attacks against fishermen, injuring 10, arresting 22, confiscating 9 boats, and destroying extensive amounts of fishing equipment.

Israeli authorities maintained a limit of three miles on all activities of fishermen in the Gaza Strip until August, when Hamas negotiated a six-mile limit as part of the ceasefire that concluded Israel’s two-month summer assault that left some 2,200 dead, most of whom were civilians, with approximately a quarter of this number small children.

According to the terms of the ceasefire, the fishing zone was supposed to expand incrementally, over the months which followed.