AWRAD: 64% of Palestinians Find Statehood Out of Reach, 92% No Islamic Representation by ISIS 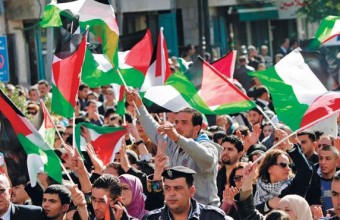 A recent poll by the Arab World For Research And Development (AWRAD) gathered 1200 Palestinian respondents, in the occupied West Bank and Gaza, to reach a national opinion regarding the performance of governments, living conditions, rebuilding Gaza, popularity of political factions, elections, negotiations, third Intifada uprising, ‘ISIS’ phenomenon and ‘Operation Decisive Storm’.According to the PNN, the numbers showed that an absolute majority (92%) of Palestinian respondents believe that ISIS does not represent ‘true Islam,’ saying that the crimes committed by ISIS cannot be a foundation of an Islamic state.

Regarding the Saudi-led military campaign in Yemen, 49 percent believe that it is unjustified; and one third believes otherwise.

On the local level, only 1% of Gaza respondents stated that the economic situation of their families has improved since last year, while 74% stated that it has declined.

Approval rate of President Mahmoud Abbas hit below 50% for the first time in his tenure as the President of the PA.

Marwan Bargouthi is the most popular leader and Fatah’s popularity reaches 33%.

39% of respondents have stated that they undecided or will not vote in the next PLC election.

82% of respondents support the immediate conduct of legislative and presidential elections in the West Bank and Gaza.

45% of respondents will not vote or do not know who will they vote for in a presidential election.

67% of respondents oppose the outbreak of a third Intifada at this time.

50% of respondents oppose the immediate resumption of negotiations between the PA and Israel.

20 years after Oslo, 64% of respondents believe that the Palestinians are farther away from achieving their goal of a Palestinian state than they were 20 years ago.