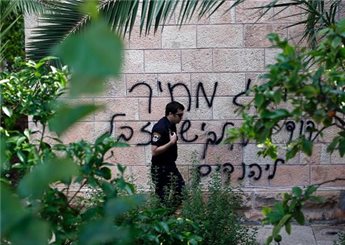 Vandals have smashed gravestones at a Maronite Christian graveyard in a village near Israel’s northern border with Lebanon, Israeli police said on Wednesday.Police opened an investigation after receiving a report about damage to a number of graves at the Christian cemetery in Kufr Birim, spokeswoman Luba Samri said, indicating that the tombstones were ‘broken and displaced.’

According to AFP, Kufr Birim is a derelict Palestinian village whose inhabitants were evicted by Israeli forces 1948 six months after Israel was established and never allowed to return. The village was almost totally razed by the Israeli army in 1953.

Last year, Lebanese patriarch of the Maronite church Beshara Rai paid a historic trip to the Holy Land during which he visited Kufr Birim, pledging to help the displaced villagers return.

There are some 11,400 Maronite Catholics living in Israel.

The police did not say who was behind the attack, but recent years have shown a spate of hate crimes targeting Christian churches and cemeteries, with the perpetrators believed to be Jewish extremists.

So-called ‘price-tag’ attacks are often carried out by Israeli extremists against the Israeli military and Palestinian property, Muslim and Christian alike, in retribution for perceived action against the Jewish-only settlement enterprise throughout the occupied West Bank and East Jerusalem.

Following price-tag attacks on Vatican-owned offices in occupied East Jerusalem in May 2014, Israeli Internal Security Minister Yitzhak Aharonovitch said the government planned to begin using administrative detention against suspected extremists, but has since only given one 30-month prison sentence.

The US State Department’s 2013 Country Reports on Terrorism included price-tag attacks for the first time, citing UN figures of some ‘399 attacks by extremist Israeli settlers that resulted in Palestinian injuries or property damage’ during that year.

In addition to rising hate crimes against Israel’s minority groups, Israeli policy itself has been criticized for systematic discrimination against non-Jewish religious groups.

In a report published in 2012, the US State Department highlighted Israeli policies restricting freedom of worship for Palestinian Christians and Muslims.

‘Strict closures and curfews imposed by the Israeli government negatively affected residents’ ability to practice their religion at holy sites, including the Church of the Holy Sepulchre and Al-Aqsa Mosque in Jerusalem, as well as the Church of the Nativity in Bethlehem,’ the report said.

‘The separation barrier significantly impeded Bethlehem-area Christians from reaching the Church of the Holy Sepulcher in Jerusalem and made visits to Christian sites in Bethany (al-Eizariya) and Bethlehem difficult for Palestinian Christians who live on the Jerusalem side of the barrier.’