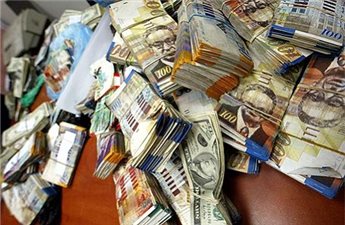 The Israeli government will transfer withheld PA tax funds, in full, on Sunday or Monday, senior Palestinian government officials have announced.In a statement released late Friday, Prime Minister Rami Hamdallah said Israel had pledged at a meeting with Palestinian officials to hand over the taxes collected between December and March, amounting to nearly half a billion dollars.

Palestinian Minister of Civil Affairs, Hussein al-Sheikh told Ma’an News Agency, on Saturday, that the 1.8 billion shekel transfer would take place by Monday, and Israeli media also reported that the transfer will take place on Monday.

Hamdallah said that it had been agreed with Israeli officials that Palestinian municipalities’ and companies’ debts would be reviewed with a joint Palestinian-Israeli economic committee in attendance, and not just the Israeli side.

The Prime Minister said that once the funds are received, the PA will pay the April salaries of its 180,000 employees, who have only received 60 percent of their wages since December.

The deficit will also be paid ‘as soon as possible,’ Hamdallah said.

The United Nations Special Coordinator for the Middle East Peace Process, Nickolay Mladenov, said in a statement: ‘I welcome the announcement that agreement has been reached.’

He added: ‘Withholding these revenues for over four months has undermined the stability of the Palestinian institutions and the ability of Prime Minister Hamdallah’s government to pay public sector salaries and provide needed services.’

Under the 1993 Oslo Accord, Israeli is supposed to transfer to the PA around $127 million every month in customs duties levied on goods destined for Palestinian markets that transit through Israeli ports.

Excluding foreign aid, these tax revenues make up around two-thirds of the PA’s annual budget.

However, Israel has frequently withheld the funds in order to put political pressure on the Palestinian government.

In early January 2015, Israeli authorities froze the delivery of the tax revenues as a punitive measure in response to Palestine’s decision to join the International Criminal Court.

Ten days after Israeli Prime Minister Benjamin Netanyahu was reelected, on Mar. 27, his office announced that Israel would release the funds, but only after significant deductions had been made to cover Palestinian debts.

In a statement, the office said: ‘Tax revenues that have been accumulated through February will be transferred, after payments for services to the Palestinian population have been deducted, including electricity, water and hospital bills.’

Hamdallah rejected the offer, responding that the PA was not responsible for the debts owed by municipalities and the electricity distribution company.

In early April President Mahmoud Abbas threatened to turn to the International Criminal Court over Israel’s refusal to fully release the funds.

The international community has repeatedly called on Israel to release the tax funds, as thousands of Palestinian public servants have not received full paychecks for over three months.