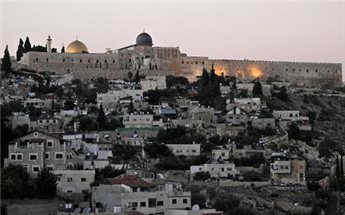 The Israeli Supreme Court has approved the application of a law allowing the Israeli state to seize property in East Jerusalem whose owners live in the West Bank or Gaza, in a move slammed by Palestinian officials.A panel of seven judges approved application of the ‘Absentee Property Law’ in East Jerusalem, despite warning that it presents many problems and should be used only in the ‘rarest of rare cases,’ Israeli newspaper Haaretz reported on Thursday.

Senior PLO official Ahmad Queri decried the decision, saying the law was based on racial discrimination and was aimed at removing Palestinians from Jerusalem. He said it would lead to an exclusively Jewish Jerusalem.

Ma’an further reports that this questionable Israeli law was enacted in 1950 in the aftermath of the violent expulsion of approximately 750,000 Palestinians, and allowed the newly created Israeli state to seize Palestinian property within its boundaries.

Following the Six Day War in 1967, Israeli municipal boundaries were extended to include East Jerusalem in contravention of international law, meaning that Palestinians living in the West Bank or Gaza with property in East Jerusalem were suddenly considered ‘absentee’ owners under Israeli law.

The property is transferred to Israel’s Custodian of Absentee Property, which then rents them out to right-wing Jewish families.

The Supreme Court’s ruling on Thursday came in response to a growing number of appeals filed by Palestinians who had lost their property under the law.

The ruling effectively rejected the Palestinian appeals and legalized application of the law throughout East Jerusalem.

PLO official Queri said the decision was in blatant defiance of the international community and allowed for the illegal confiscation of Palestinians’ property in the city.

‘Running away from responsibility’

The Supreme Court made the approval despite expressing a number of misgivings.

Supreme Court President Asher Grunis wrote that the law considers Palestinians with property in East Jerusalem ‘absentees,’ ‘not because of any act taken on their part, but because of the transfer of control in Jerusalem to Israeli hands and the application of Israeli law there,’ Haaretz reported.

He said that property owners in the West Bank and Gaza do not live ‘under the control of other countries,’ but ‘in territories in which Israel has control — to some extent — over.”

Supreme Court President Miriam Naor went further, saying that although application of the law is legal, she doubts a case could be found in which the law could be applied in practice, Haaretz reported.

Grunis also noted that if taken literally, the law could be applied to Israelis living in illegal settlements across the West Bank who own property inside Israel and East Jerusalem.

Avigdor Feldman, a lawyer representing one of the Palestinian appellants, said that the Supreme Court was ‘running away from responsibility,’ Haaretz reported.

He said: ‘The justices demonstrated a very formalistic approach. They determined that (the law) is not proper, but have passed the buck to the courts, attorney general and the Custodian. They have asked to trust the generosity of the state not to make use of (the law).’

Feldman added: ‘It is clear that the law was created during a different situation and for other purposes, and is not appropriate for the present circumstances.”

The decision has been blasted by Palestinian officials, PA news agency Wafa reported.

In addition to scathing remarks from the PLO, Hanna Issa, Secretary-General of the Islamic-Christian Committee to Support Occupied Jerusalem and Holy Sites, denounced the court ruling.

He said Israel has no right to seize property belonging to ‘Palestinian residents who were forced out of their homeland.’

There are now believed to be more than 300,000 Jewish settlers in East Jerusalem.

The international community views East Jerusalem as part of the Palestinian territories and recognizes the annexation and settlement programs as illegal under international law.