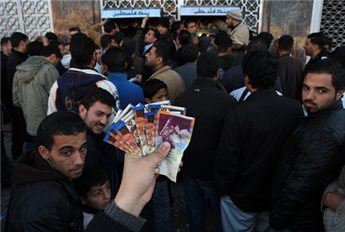 The Palestinian Authority, Tuesday, declared that it was able to pay the remainder of civil servants’ wages and pensions for the past four months (40% each), hours after Israel released some 1.85 billion shekels ($473 million) in withheld taxes collected on behalf of the Palestinians. Last Thursday, Prime Minister Rami Hamdallah said that Israel had agreed to repay withheld Palestinian tax revenues in their entirety.

A few days later, according to WAFA, Minister of Civil Affairs Hussein al-Sheikh told reporters that Israel will be transferring withheld Palestinian tax revenues on Sunday or Monday, at the latest.

Earlier this month, President Mahmoud Abbas refused to receive tax revenues collected by Israel, after the latter had made considerable deductions to offset electricity debts accumulated on the PA.

“We didn’t accept the amount and sent it back: we told them that we either compel arbitration regarding these funds that they label as debts, or take the matter to the International Criminal Court [ICC],” Abbas said.

Up until the beginning of this month, public sector employees only received 60% of their salaries for December 2014, January, February and March 2015, and the remainder (160%) was left a debt on the government’s treasury.

On January 4, Israel decided to withhold PA’s tax revenues, in retaliation for Abbas’ move which resulted in Palestine’s accession to 20 international treaties, including the International Criminal court (ICC).

Abbas’ move came as the United Nations failed to approve a draft bill calling for an end to the Israeli occupation and the establishment of the Palestinian state within three years.