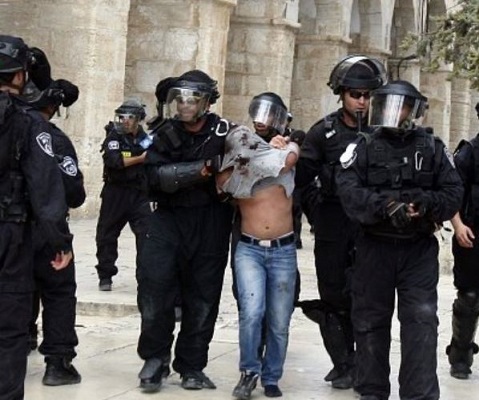 Israeli soldiers attacked dozens of Palestinian worshipers near the Chain Gate, one of the Gates of the Al-Aqsa Mosque, in occupied Jerusalem, and kidnapped two young men. Army invades a village near Nablus, while settlers storm area of the former colony near the city.Local sources said the police, and undercover officers, assaulted dozens of women and men, punched, kicked and clubbed a number of worshipers, and prevented them from entering the Al-Aqsa Mosque compound.

The sources added that the police denied the Muslim worshipers access to the mosque while groups of Israeli extremists marched in its yards carrying Israeli flags, and chanting against the Arabs and Palestinians.

The Police accompanied the extremists while preventing the Muslim worshipers from entering the mosque compound, and kidnapped two young men identified as Tamer Shala’ta and Taher Sheikh Khalil.

It added that the invasion took place after the soldiers stormed, and searched, areas close to the Beta and Huwwara Junction.

In related news, dozens of Israeli fanatics invaded the area of the former Homesh colony, northwest of Nablus, and marched in the early dawn hours carrying Israeli flags and chanting anti-Palestinian slogans.

Ghassan Daghlas, a Palestinian official in charge of Israeli Settlements File in the northern part of the West Bank, said the invasion is part of a series of violations against the Palestinians and their land.

He added that the violations are carried out despite a ruling by the Israeli Supreme Court, denying the settlers access to the evicted settlement.

Daghlas added that the settlers conduct frequent attempts to occupy Palestinian lands, and install illegal outposts, near the village, and in the al-Mas’oudiyya area that belongs to Borqa village, northwest of Nablus.