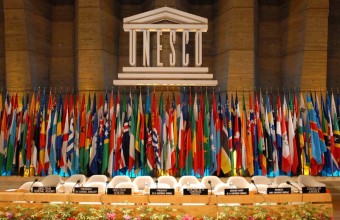 UNESCO, the United Nations Educational, Scientific and Cultural Organization, on Tuesday received two motions strongly condemning Israeli occupation’s humanitarian and legal violations in the occupied West Bank and Gaza.The first motion denounced Israel’s discriminatory policy in Jerusalem, especially at Al Aqsa Mosque, the the first Qiblah and the third holiest place in Islam. The violations were represented by settler attacks on the mosque, with the support of the Israeli police and military, in addition to the ongoing Judaization projects and excavations in the old city of Jerusalem.

These acts threaten to damage the the heritage of the Old City of Jerusalem and its walls, which have been included on the World Heritage list by Jordan since 1981, and Heritage in Danger in 1982.

The second motion demanded that Israel lift the blockade on Gaza, and condemned the murder of more than 550 children during its last offensive in the summer of 2014.

The motions were unfavored by three members of the UNESCO, which are the US, Germany and Czech Republic, while 20 country members abstained from the vote.