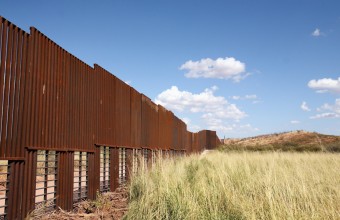 The US had chosen an Israeli company called Elbit Systems Ltd. (an Israel international defense electronics company engaged in a wide range of programs) to build a surveillance system on whole borders of Arizona and Mexico.This system is called Integrated Fitting Towers (IFT), and comprises the building of surveillance towers for snipers, with cameras and radars, to detect the movement of native american crossing. The contract is between Elbit and the US Homeland Security, and will cost about 145 million to be implemented over 8 years.

The project however will violate the US treaty, since the land grab will take land from native tribe Tohono O Odham, a Native American Nation. Also, the tribe has been complaining that American and Israeli surveillance cameras on the construction site are directed on reservation and not on the construction site, which violates their privacy and gives them a feeling that they are being spied on.

Building walls and electric fences and Security Towers is no doubt Israel specialization for a simple reason: that Israel lives on usurped land-like the Americans- for this reason- they feel insecure and threatened because they fear that what they inflicted on others will get to them.

American borders were designed by Europeans, forced upon native american as part of their sociology, economics strategy against the native american. We have formed Native American and Middle East Political action Committee and have filed complaint at UN against Israel.

In their defense, an organization called Native american and Middle East Political Action Committee has filed complaint at UN against Israel, Elbit and American for intruding on Native American land. It also intends to file lawsuit for raising surveillance towers and violating privacy rights.