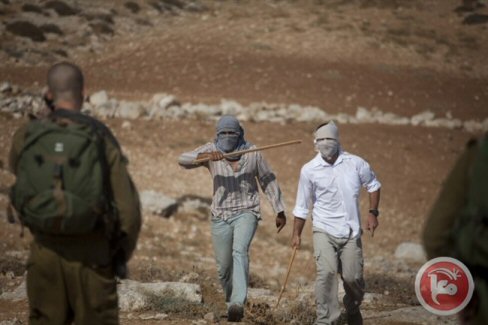 Hundreds of Israeli settlers raided Palestinian villages in the Nablus district on Thursday, officials and witnesses said. Several Palestinian students suffered tear-gas inhalation as Israeli forces raided a girls’ school to the south of Nablus, on Thursday as well.Ghassan Daghlas, who monitors settlement activity in the northern West Bank, told Ma’an News Agency that over 100 armed settlers entered Sebastia and an area between Aqraba and Beita villages.

Locals said that Israeli military vehicles deployed in Huwwara village near a checkpoint of the same name to protect the settlers.

It is unclear why the settlers were present in the area.

An Israeli army spokeswoman told Ma’an she was not aware of the incident.

However, she added that Thursday is a holiday in Israel, ‘so it’s possible that there are many more travelers in the area because the army opens up training grounds for tourists to travel on.’

Thursday is Independence Day, which marks the establishment of the State of Israel following the expulsion of 750,000 Palestinians from their homes in what became Israel.

The villages south of Nablus are a frequent site of settler violence and Palestinian clashes with Israeli forces as they are located beside the notoriously violent Israeli settlement of Yitzhar.

Settlers frequently attack locals and prevent farmers from reaching their lands, in addition to attacks on olive trees themselves.

Settler violence against Palestinians and their property in the occupied West Bank is systematic and ignored by Israeli authorities, who rarelyintervene in the violent attacks or prosecute the perpetrators.

In 2014, there were 324 incidents of settler violence against Palestinians in the occupied West Bank, according to the UN Office for the Coordination of Humanitarian Affairs.

Over 500,000 Israeli settlers live in the occupied West Bank, including East Jerusalem, in contravention of international law.

Palestinian security sources told Ma’an that several Israeli military vehicles raided the Al-Sawiya girls’ school claiming rocks were thrown at settlers’ vehicles on the main road of the village from the school.

Sources added that 16-year-old student Fatima Suleiman was taken to the Salfit Governmental Hospital for treatment.

Israeli forces arrived at the scene and asked the suspects to stop, later using standard means of crowd dispersal to ‘stop further violence,’ she added.

The Al-Sawiya girls’ school has been subject to Israeli raids in the past, undergoing a raid recently in February 2015, according to local media.

Several schools in the occupied West Bank and East Jerusalem face constant military presence, while some students are forced to travel to school by foot through military firing zones, violating Palestinian students’ right to education, according to rights group EAPPI.

No arrests or serious injuries were reported following the incident.