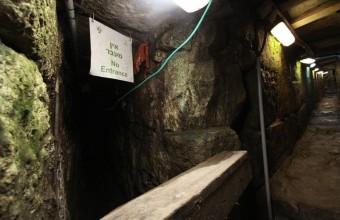 The Islamic-Christian Committee to Support Occupied Jerusalem and Holy Sites warned,, Thursday, of a new project underway by Israeli authorities which is conducting tunnel excavations beneath the homes in Silwan village, Old City Jerusalem, and heading towards Al Aqsa Mosque.The committee said that the tunnel was a continuation to the extremist Israeli plans against the mosque, which aim on establishing the proclaimed temple mount after ruining the mosque, adding that the tunnel and settlement projects paved way for more dangerous violations and settlements in the city.

To his part, General secretary of the committee, Dr. Hanna Issa said that the excavations are considered war crimes, since they obliterate holy places and heritage sites, erase the Arab Islamic identity and conceal antiquities, to claim an Israeli right and identity by theft and military force.

‘This tunnel comes in a series of flagrant violations by the Israeli occupation against Jerusalem, and so, these moves attempt to erase the Arab and Islamic heritage are null and void in the international law and the U.N. conventions.’

The committee, in a statement which PNN received, said that these excavations are an act of war on the holy sites of Jerusalem, since it occurs in coordinance with illegal plans for the goal of establishing the proclaimed temple mount, over continuous Zionist claims to prove Talmudic possessions for political colonization.