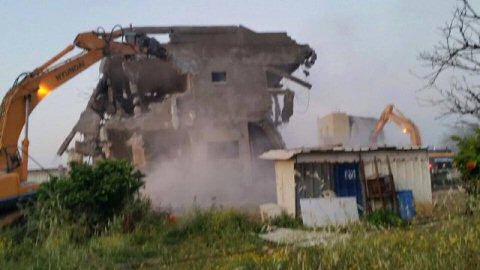 A general strike has been called for Tuesday in protest of the recent wave of home demolitions in Palestinian communities throughout Israel. The strike, called for by the High Follow-Up Committee of Arab Citizens of Israel, will conclude with a protest demonstration in Tel Aviv on Tuesday evening.

Israel demolished a home belonging to Tariq Khatib in the Palestinian village of Kufr Kanna on April 13. When destroying the home, located in Israel’s northern Galilee region, Israeli police forces shot rubber-coated steel bullets, tear gas and stun grenades at protesting residents, all of whom are citizens of Israel.

And two days later Israeli forces demolished three homes in the unrecognised Palestinian village of Dahmash, located between the Israeli cities of Ramle and Lod.

While the demolitions were done under legal pretexts, these are merely the result of ongoing discrimination in the allocation of public lands, community planning and the solution of housing shortages.

Sikkuy, The Association for the Advancement of Civic Equality, notes that while Israel’s Palestinian and Jewish communities have grown at similar rates since 1948 (eight to ten times), some 700 new cities and towns were established for Jewish citizens, while not one new city has been established for Palestinian citizens, apart for townships in the Negev for Bedouins who were moved from their lands.