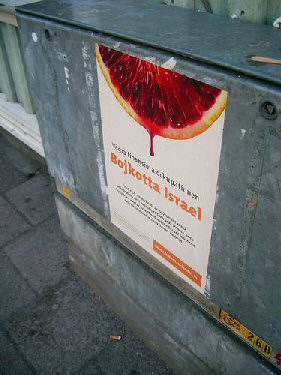 In its periodic report on the boycott against Israeli products, the national office for land defense said that the movement is growing worldwide, and that people in different fields including cultural, academic, economic, sport and military fields, are demanding Israel be held accountable for its crimes against Palestine.The last week witnessed a series of activities on Palestinian, pan-Arab and international levels, the Palestinian News Network (PNN) reports.

On a Palestinian Level

The PLO Executive Committee welcomed a letter sent by the foreign ministers of 16 countries to the High Commission of the European Union demanding the speedy marking Israeli settlement products in European markets. It called for the adoption of policies and decisions of concrete and binding and action on illegal Israeli settlements, including the source of certification and proper marking appropriate to the source of goods and products manufactured in these settlements, calling it a first step in a series of steps should lead to a complete ban of all settlement products.

The committee demanded all members of the European Union to implement directive steps, following article 3 (1) (8); products should be marked in reference to the origin and place of issuance, so as to ensure that consumers in Europe are not mislead.

The committee also praised the Palestinian Popular Struggle Front, and the European steps in support of the rights of the Palestinian people, which comes under the intransigence and racism policy adhered to by the Israeli occupation. The front calls on EU foreign ministers for the application of the marking procedure in response to the halt in the peace talks between Israel and the Palestinians.

In the Arab World

In Egypt, ‘the Egyptian campaign to boycott Israel (BDS Egypt’) was launched. The largest alliance in the Egyptian province of the State of the occupation date.

The campaigners include representatives for political parties and revolutionary movements, in addition to student associations and labor unions as well as thousands of independent personalities, artists and, intellectuals.

The launch of BDS in the heart of the Arab world comes just weeks after the tenth anniversary of the launch of Palestinian society’s BDS appeal before the historical province, a very important event in the context of expanding the popular and civil boycott in the Arab world. BDS Egypt has promised expansion in Morocco, Lebanon, Jordan, Kuwait, Bahrain and Tunisia.

The Latin American Studies Committee has announced US accession to the list of academic organizations boycotting Israel and their educational institutions intersection. During the annual National Conference, which was held last weekend in San Francisco, members voted unanimously absolute and overwhelmingly on the decision to boycott the academic institutions that have a historic obligation towards social justice and anti-colonialism, racism and ‘apartheid’ systems.

The South African Communist Party, a partner in the ruling tripartite coalition, issued a statement calling for a broader academic boycott imposed on Israeli universities and educational institutes.

The statement was issued in reaction to the party’s frustration with Israel’s ban on the Minister of Higher Education entering, demanding the expulsion of the Israeli ambassador in South Africa.

The satement said that the party is willing to pay the price of a return ticket for the Israeli ambassador to Tel Aviv and adopt the principles of Israel boycott movement (BDS), even isolating Israel to end its occupation of the Palestinian people.

It also promised unconditional solidarity with the Palestinian people and within the global movement of solidarity, concluding with an affirmation of solidarity with all oppressed people of Palestine ‘to Pretoria, and Cape Town to Cuba, and Soweto Even Swaziland.’