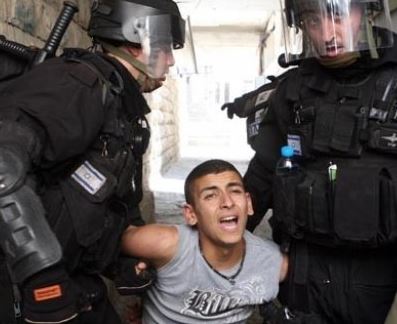 Israeli soldiers kidnapped, on Tuesday at dawn, four young Palestinian men in occupied East Jerusalem, in addition to one Palestinian in Bethlehem, and one in Hebron.The Wadi Hilweh Information Center (Silwanic) have reported that the soldiers stormed a number of homes, and searched them, in the al-‘Isawiyya town, in occupied Jerusalem, and kidnapped four young man.

The four have been identified as Murad Shalloudi, Mohammad Abdul-Raouf, Mohammad ‘Atiyya and Ali Mohammad Mahmoud.

In addition, soldiers invaded the al-‘Azza refugee camp, north of Bethlehem, and kidnapped one Palestinian after breaking into his home, and searching it.

The kidnapped Palestinian has been identified as Ibrahim Fuad ‘Amrin, 22 years of age.

Mohammad ‘Awad, spokesperson of the Popular Committee against the Wall and Settlements in Beit Ummar, said the soldiers also confiscated the Abu ‘Ayyash’s car, before moving him to the Etzion military base, north of Hebron.

The army conducts daily invasions and arrests in different parts of the occupied West Bank, including in and around occupied East Jerusalem, as part of ongoing violations against the Palestinians and their property.