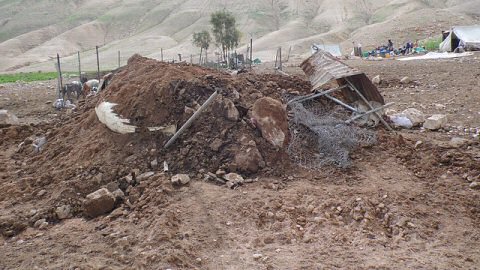 Israeli forces demolished a Palestinian-owned home in the Ramallah-area village of Nabi Saleh, Tuesday morning.The Palestinian News and Info Agency reports that the home, built prior to Israel’s 1967 occupation of the West Bank, was owned by Mohammad Mahmoud Tamimi, an American-Palestinian who lives abroad. Last month Israel’s Civil Administration issued a demolition order for Tamimi’s home, in addition to another twelve privately-owned Palestinian homes in Nabi Saleh.

The popular committee of Nabi Saleh has invited Israeli and international activists to join them today from 5pm to begin rebuilding the demolished home.

And, on Monday morning, Israeli troops demolished four residential structures in the village of Al Jiflik to the north of Jericho in the Jordan Valley.

Some 30 Palestinians were rendered homeless from the demolitions.