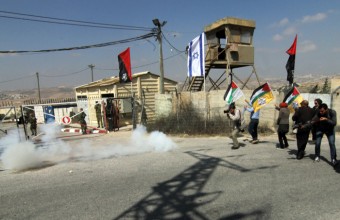 Activists, on Tuesday, have raised the Palestinian flag over an Israeli occupation military camp set in Al-Khader village, south Bethlehem, removing the Israeli flag.Activist against the Wall and Settlements, Hassan Breijiah told the PNN that the Palestinian flag was raised, and that the Israeli flag was taken down from atop the camp, during an exchange of shifts by Israeli soldiers in the camp.

He added that this site was located within the 1967 occupied territory, which, according to international law, is illegal. He stressed that all settlements and military sites on the occupied lands of 1967 were legitimate targets of popular resistance in all parts of the West Bank.

He additionally pointed out that the spiral strategies of resistance will have low numbers and capabilities, but will make great achievements and effects. ‘The events will continue in the coming days, to confirm our determination to obtain our rights, which must be guaranteed in the international law.’