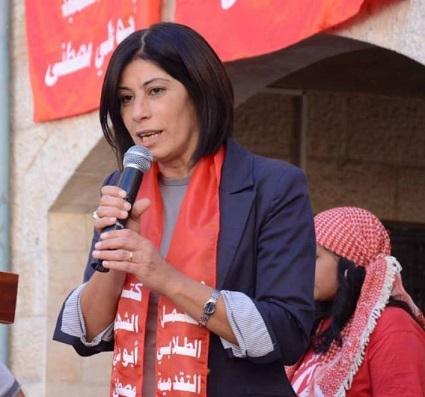 The head of the Legal Unit of the Prisoner Support and Human Rights Association (Ad-Dameer), Lawyer Mahmoud Hassan, stated Tuesday that the Ofer Israeli military court decided to postpone the Wednesday trial of Legislator Khaleda Jarrar until further notice.The army kidnapped the 52-year-old legislator, senior political leader of the Popular Front for the Liberation of Palestine (PFLP), and a democratically elected legislator, on April 2, 2015.

Hassan said the defense team has asked the Military Judge in Ofer for a continuance as the military prosecutor never provided additional materials related to the case of the detained official.

Three days after the soldiers abducted Jarrar from her home in central West Bank city of Ramallah, the Israeli military court issued a six-month arbitrary Administrative Detention against her, holding her without charges.

On April 15, the military prosecutor filed an indictment of twelve charges against the feminist leader, including “membership with an illegal organization,” and “holding and participating in protests in solidarity with political prisoners.” http://www.imemc.org/article/71248